Freddie is a 6 year old, male, neutered cat whose owner brought him into the clinic when he became very sick.
For the last couple of days the owner had noticed that Freddie had been in the litter tray more often than normal and seemed quite agitated while he was using it, sometimes making yowling noises and licking around his back end frequently.
When Freddie came into the hospital he was lethargic, weak on his feet and his heart was racing. When his abdomen was palpated he was uncomfortable and a large, rock hard bladder was felt. An x-ray was taken to confirm this finding and Freddie was diagnosed with urethral obstruction (a blocked bladder).
Several underlying issues can cause obstruction of the narrow urethra in male cats
• A hard plug made up primarily of crystals, cells and other debris from the bladder that accumulate and bind together.
• A small bladder stone that has left the bladder and passed down the urethra.
• Bacteria and inflammatory cells from a urinary tract infection
• Spasm and/or swelling of the urethra caused by inflammation.
A blocked bladder is a painful and life threatening condition and can lead to kidney failure and death within 24 – 48 hours if left untreated.
Freddie was anaesthetised and a urinary catheter was very carefully used to remove the obstruction and pass up the urethra into the bladder where we were able to flush the bladder of any remaining debris and crystals.
Freddie remained in the hospital for 2 days on IV fluids, after 24 hours he was back to his normal smoochy self but we still kept a close eye on him for another day to make sure he didn’t block again.
What caused the obstruction in this case was a mixture of crystals and debris formed in the bladder. The photo shows what crystals look like under the microscope.
Freddie made a full recovery and went home with appropriate medications and a special medicated food that will help dissolve any remaining crystals. He is a real lucky cat who has definitely used up one of his nine lives!
* Cat photo supplied by i-stock 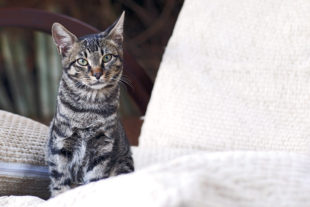 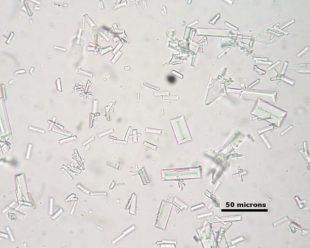