Jinx has long been our friendly feline face at the Matamata Veterinary Services – Equine hospital. However early this year, aging Jinx found herself in a spot of bother (cause unknown), and was found after she had been missing for days hobbling on 3 legs.
And so Jinx started her journey with the MVS Small Animal team. After stabilisation with fluids and pain relief, xrays showed us that Jinx had severely fractured and damaged nerves in her left hind leg. Blood tests showed otherwise Jinx was a very healthy 19 year old, so, after much discussion the decision was made to amputate her injured leg.
Jinx handled the general anaesthetic and surgery like a trooper, and after a few days R & R headed back to the equine team for the rest of her recovery. Initially she did very well but after a few weeks Jinx began to become increasingly ‘spooked’ and scared, her behavior and temperament changed and she had episodes of running backwards in fright.
She was re-admitted to the Small Animal hospital, the wound was found to have healed well with no infection, and her blood tests were normal. It was thought she most likely had phantom limb pain so medications were started to try and help her manage this neurological pain. Jinx was kept in hospital on medication and became more settled and calmer. She then began the slow process of rehab giving her increasingly larger areas to move around in, all the while helping her walk forward and not get scared and run backwards. She was a regular visitor to the lunch room as many members of the staff helped her with her recovery.
3 weeks later she returned to the Equine hospital merrily getting around on her 3 legs with no signs of phantom limb pain. She was back to her old self, however now she was not only an outside stable cat, she had learned that the couch in the lunchroom is the best place to be. At 19, having survived this massive journey to recovery, we think she well deserves the best place on the couch. 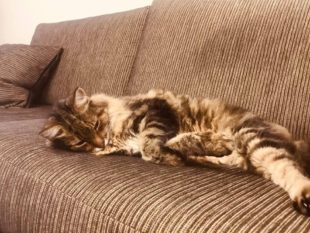 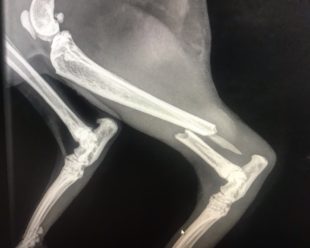